Something you might here frequently as a writer is “Show, don’t tell.” As a newer writer, I got so irritated hearing that. What does that even mean? HOW do you do that? And more importantly, how is that any different from what I’m trying to do right now? 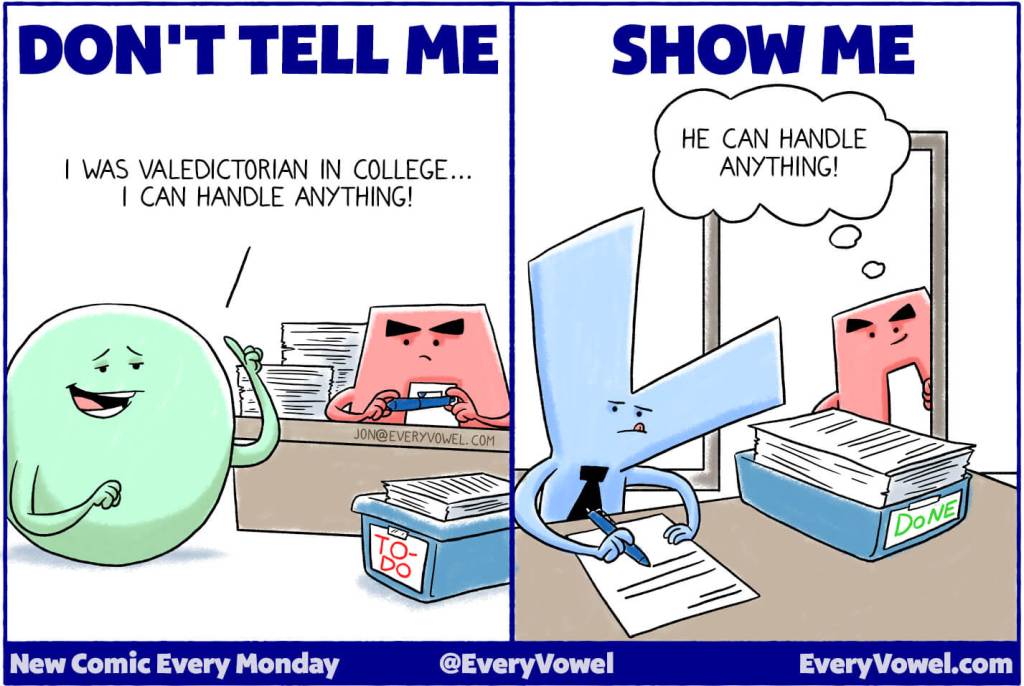 As a slightly-less new writer, I think I’m starting to understand.

I had the most amazing opportunity to take Brandon Sanderson’s writing workshop a few years ago and part of that included getting personal feedback from him. One week while he was sitting in with my critique group, we got to this section of my then-current WIP:

Night was falling as they emerged from the swamp. They were exhausted.

“Do we keep going or do we stop for the night?” Dragony asked.

Shinabar looked down. Era hadn’t stirred yet and she was paler than normal. “Keep going and hope that we don’t run into my men.”

The ambassador looked at him. “Let’s stop for just a couple of minutes. You look like death warmed over.”

“I feel like it too, and I’m not the only one who feels that way,” he warned.

The ambassador nodded. “Give her to me then. We’ll be able to move faster.” Shinabar hesitated a second before relinquishing her. Immediately, they took off again.

Dawn was breaking. “He’s back!”

Landon sighed in relief. “Good. Now I can kill him.”

Dragony and Shinabar staggered into camp; each leaning on the other for support while holding Era.

Men rushed forward to catch them as they collapsed.

This was at the end of what should have been an intense fight-as-we-take-flight scene in a swamp.

That wasn’t good enough. And for the few years, I’d turn in something *awesome* for critiques and get told,

Seriously. I give up.

And then I took an amazing class on “Tell, Don’t Show” by Josi Kilpack at the American Night Writers Association conference last September.

Turns out, I had only the first part of show, don’t tell.

Part A of “Show, Don’t Tell” is to engage the senses, which is what Brandon taught me.

Part B is to “avoid reminding us these are the character’s senses (i.e.
filtering).”

In example 1, we’re being told what He is experiencing. We’re focused on him and what he’s doing (watching the sun).

In example 2, all of our attention is on the sunset. We’ve all experienced a sunset. (If you haven’t, I’m terribly sorry. Your first assignment is to look up when sunset is for your town and then to go outside 5 minutes before then.)

The writer doesn’t have to spend a lot of time describing those sensations. We as readers have already experienced them. Simply shifting our focus from the character to what is happening changes our experience. We’re more intimately involved in the story.

Part C is knowing when to show and when to tell. Honestly, that depends on what your end-goal for the scene is. And I can’t help you with that.